Catching up with Noah Centineo and Lana Condor

Not even the global outbreak of the new coronavirus can stop Noah Centineo and Lana Condor’s love affair with their Filipino followers. The popular stars of Netflix’s “To All the Boys I’ve Loved Before” (TATBILB) and its eagerly anticipated sequel “To All the Boys: P.S. I Still Love You” had to cancel their trip to Manila “in order to ensure the health and well-being of our fans and all those attending.”

So, to assuage fans’ frustration, we did the next best thing: Interview the attractive couple on Google Hangouts.

Our breezy, easygoing chitchat went without a hitch, even when Noah, at some point, was very rudely interrupted by a huge … yikes … cockroach!

“There’s a massive roach here … wait, [this is] ridiculous … sorry about that,” he quipped in exasperation. The dreamy heartthrob, who was also seen in Camila Cabello’s “Havana” music video and is set to don He-Man’s costume in the live-action adaptation of “Masters of the Universe,” is human, after all.

Noah’s “humanizing” reaction to the interlude with the pesky insect reminded us of the conflict that fuels the moun-ting indecisiveness of Lara Jean (LJ) Covey (Lana) toward Peter Kavinsky (Noah’s character).

“P.S. I Still Love You” began streaming last Wednesday In the story, when another one of Lara Jean’s letter recipients John Ambrose McClaren, played by former “Hamilton” actor and now “Dear Evan Hansen” lead star Jordan Fisher, resurfaces, Peter’s little faults begin to get “magnified.” It’s like getting the less-than-perfect version of the hunky, larger-than-life man of LJ’s dreams.

Ever the gentleman like Peter, Noah even helped us start the Q&A ball rolling by asking his leading lady, “What were you most excited about the trip to Manila?”

Lana’s quick reply, “I was so excited to eat lumpia (laughs)! I even texted my friend, ‘We’re going to eat so much lumpia in the Philippines!’”

You can take our word for it, peeps. Noah’s disappointment about not meeting his Pinoy admirers was palpable in his much-swooned-about bedroom voice, saying that hopscotching through the country’s world-famous beaches wasn’t even part of his Manila itinerary because all he wanted to do was … spend time with his followers!

“The schedule they prepared for us was just about work, work and work,” he disclosed. “But interacting with the fans would have been the greatest and most exciting part of that visit.”

Excerpts from our interview with Noah and Lana: 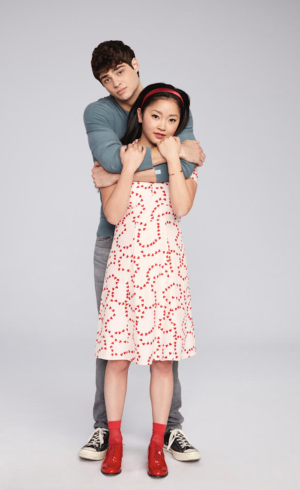 Centineo and Condor in “To All
the Boys: P.S. I Still Love You”

We interviewed “TATBILB” director and now producer Susan Johnson two years ago. She said that the chemistry between you two was immediate during the table reads in LA, and that obviously translated well onscreen. Did you feel that connection during the reading?

Noah: Yes. Chemistry is super important between leads, especially in rom-coms. You need to be able to trust the person you’re working with. But what I love even more about working with Susan and Lana is that there’s an open dialogue between us, whether we’re doing a tough [dramatic] scene or a funny moment. We’re very lucky to have that.

Susan said that the first movie was about “facing one’s fears.” What’s your biggest takeaway from “P.S. I Still Love You”?

Lana: This may sound cheesy, but I think the important takeaway is “to follow your heart.” When you find out what you like in a person, you don’t listen to your gut as much as follow what your heart tells you.

Noah: For the sequel, I like the fact that you can root yourself in a firm belief over something, then have that belief completely dismantled and dissolved. And from that rubble, a stronger belief can ultimately emerge. Then, you can move on with your life. I think that’s my big takeaway from this film.

Are you guys anything like your characters, Lara Jean and Peter?

Lana: As you will soon see in the third movie (“To All the Boys: Always and Forever, Lara Jean”), I’m louder and way too annoying. I talk too much—and that’s not Lara Jean at all. She can do better by talking and spea-king her mind a little more. But absorbing LJ’s characte-ristics is sometimes inevitable. They are parts of LJ that seep into my brain, because I spend so much time “being” her.

Lana, we love the variety of your other artistic pursuits—from dance to the movies, like playing Jubilee in “X-Men: Apocalypse.” Then, there’s your other Netflix project, the animated series “Rilakkuma and Kaoru.” You are at your best when you allow viewers to glean into your vulnerable side, especially in characters like LJ and Kaoru. How did you relate to Lara Jean’s indecisiveness?

Lana: Oh, wow! Thank you for bringing up “Rilakkuma.” Kaoru is really a lot like Lara Jean because she’s quiet and structured. She has a lot of anxiety, always with a running dialogue in her head. This is something that she shares with LJ.

Ironically, when I was making “Rilakkuma and Kaoru,” I felt that portraying Kaoru was almost like how Lara Jean might be in her mid-20s or 30s. They have a very similar way of thinking. Their stillness and being quiet are pretty similar. Thank you for asking that!

If you can change something about Lara Jean and Peter, what would it be?

Lana: If I can change one thing about Lara Jean, I would have LJ wear more pants. Always working in skirts is tough, so I’d like her to wear more comfortable clothing (laughs).Noah: I would have Peter be a little more honest with Lara Jean about his dyna-mic with his ex, Genevieve (Emilija Baranac). He needs to be more forthcoming because it’s not really cheating when you hang out with your ex, since she’s going through extremely difficult circumstances with her family. Peter should be able to handle these situations better than he does in “P.S. I Still Love You.” Otherwise, he’s perfect the way he is (laughs).

On behalf of your fans, please visit us soon in Manila.

Lana: Please, save some lumpia for us when we do come eventually!

2,000 iPhones given for free by Japanese gov't to passengers stuck on ship due to coronavirus